We are storing your details Accept
Please enable JS 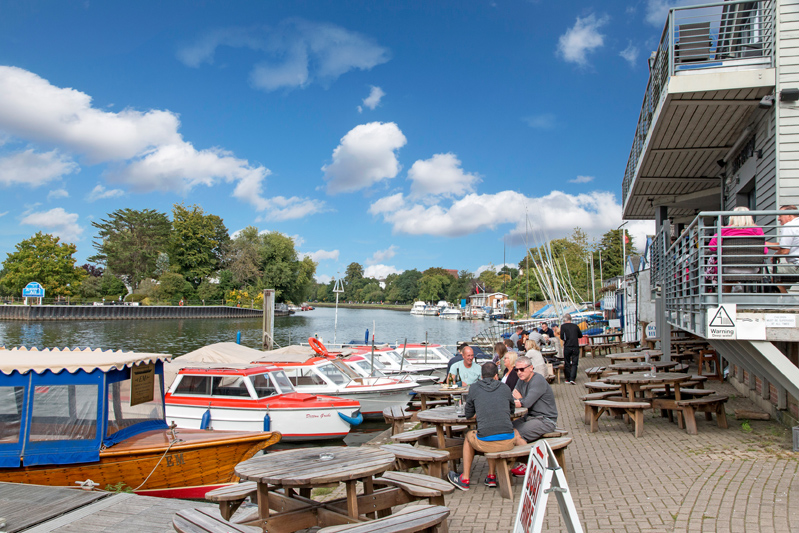 Having recently completed a beautiful development of flats in Surbiton, we thought we’d take a moment to broadcast how much this often overlooked area of Kingston Borough has to offer! Why should you be considering living in Surbiton? Well…

Surbiton Snapshot: Why We Invested in Ewell Road

Surbiton is not one of the first places to jump to mind when thinking about where to buy property in and around London. Overshadowed by its more well-known – and significantly more expensive – neighbour, Kingston upon Thames, it often gets overlooked.

People are missing a trick. Whether you’re a first-time buyer looking for a flat or an existing homeowner looking for a bit more space, Surbiton has a host of brilliant features going for it that few people are even aware of. From transport links, to amenities, to community spirit, Surbiton has so many good qualities if you’re looking to buy property and put down a few roots. Let’s start with this crucial one. If you need to live in or close to London for work, you need to make sure that your transport links are decent. Fast trains from Surbiton station pull in to Waterloo in under 20 minutes, which is faster than from some areas in Zone 3 (looking at you, Barnes), with trains running every ten minutes or less. Last train from Waterloo to Surbiton is just after midnight, with a few rail replacement buses running for the following hour. Annual season tickets come in at under £2000. Buses travel to all major nearby towns, including Kingston, Epsom and Ealing. For those who drive, the A3, leading directly to the M25, is very near. 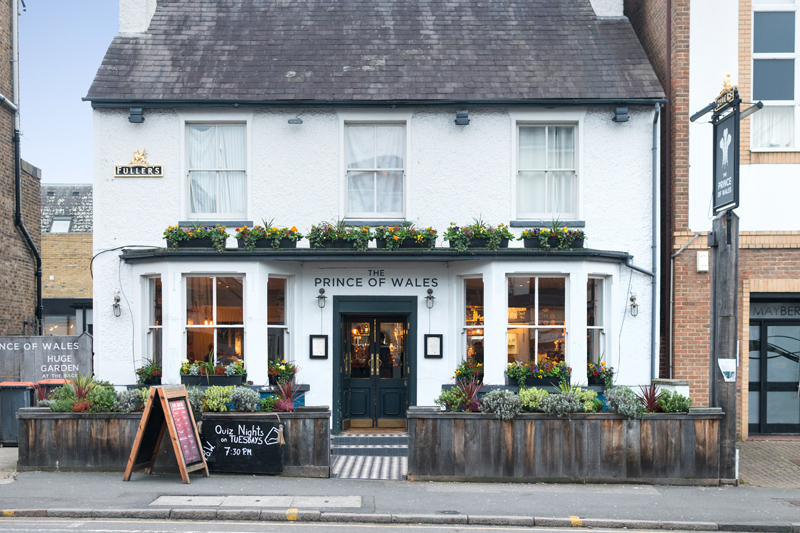 The Prince of Wales, Ewell Road 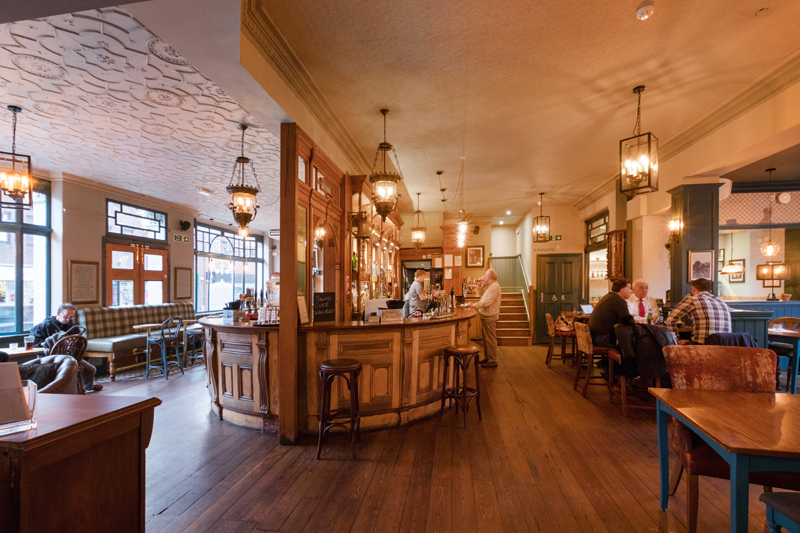 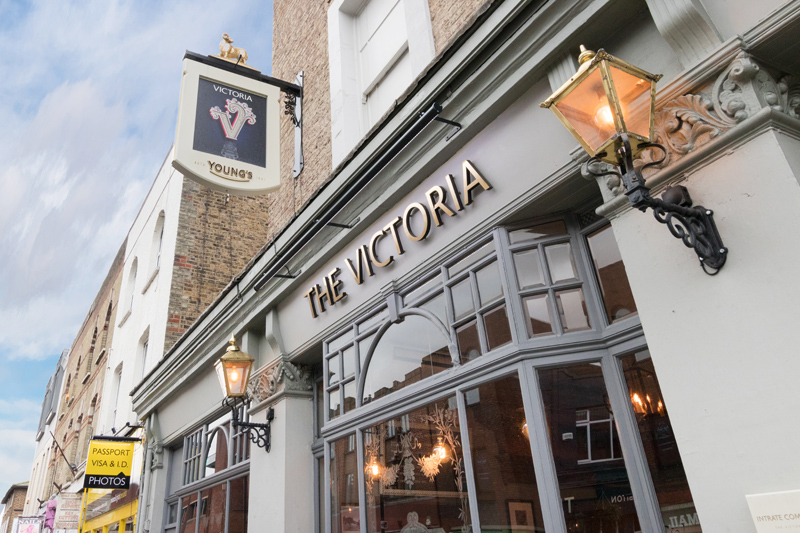 Surbiton has been around – as it is currently known – since it was incorporated into the railway network in 1838. So you can imagine that in that time it has accumulated a wealth of pubs and social history, much of which is alive and thriving today. A succession of pubs started opening up halfway through the 19th century, several still open and popular now. Pop into the Victoria Pub on Victoria Road, one of the first to grace Surbiton in 1850, to soak up the ambience and a pint; they hold a weekly pub quiz and family-friendly Arts & Crafts fun on Sundays. Or head over to the Prince of Wales on Ewell Road which opened in 1851, revamped and renamed itself the New Prince in 1994, and then refurbed once more in 2014, reverting to its original historic name. You can catch live music events and a weekly pub quiz here. The Lamb, on Brighton Road, which opened in 1854, is a family-run pub these days, which regularly holds community events and – even better – has a cheese club. 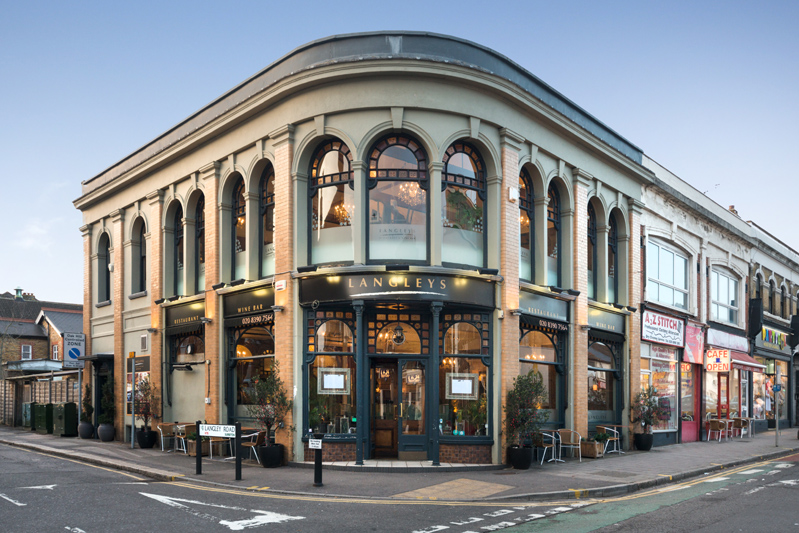 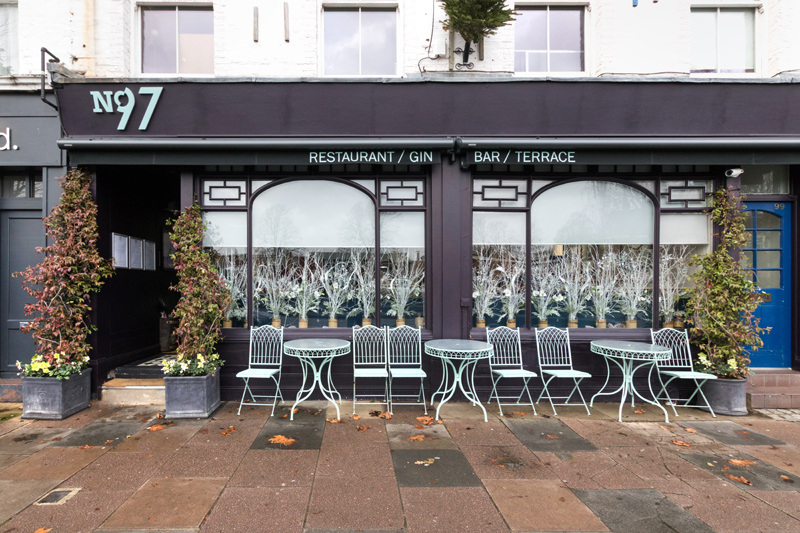 Quirky and innovative, No.97 has every gin you can imagine

A peaceful day by Surbiton’s riverside at The Harts Boatyard

Surbiton has an excellent selection of restaurant options, from local and cosy to high end and elegant. Try Langley’s Restaurant & Wine Bar on Ewell Road for refined brasserie dining in a beautiful 19th century building which has in the past served as everything from greengrocer to music store. Also on Ewell Road sits Positano, with its welcoming, family-run atmosphere and delicious Italian food. For something a little more modern and on trend, check out the innovative No.97  on Maple Road: Not just an excellent restaurant but a gin bar too! An extensive cocktail menu (or even masterclasses, should you be so inspired) tops off creative, beautifully cooked lunch and dinner options. Plus it’s just very lovely inside, run by a husband and wife team with welcoming staff. The French Tarte on Maple Road serves up exquisite, Parisian patisserie goods along with breakfast, lunch, supper and best of all afternoon tea. And finally it wouldn’t be a review of Surbiton restaurants if we didn’t include The Harts Boatyard Pub & Restaurant. Make sure you get a seat near the windows or on the terrace in summer to take advantage of its spectacular riverside location and lovely views. 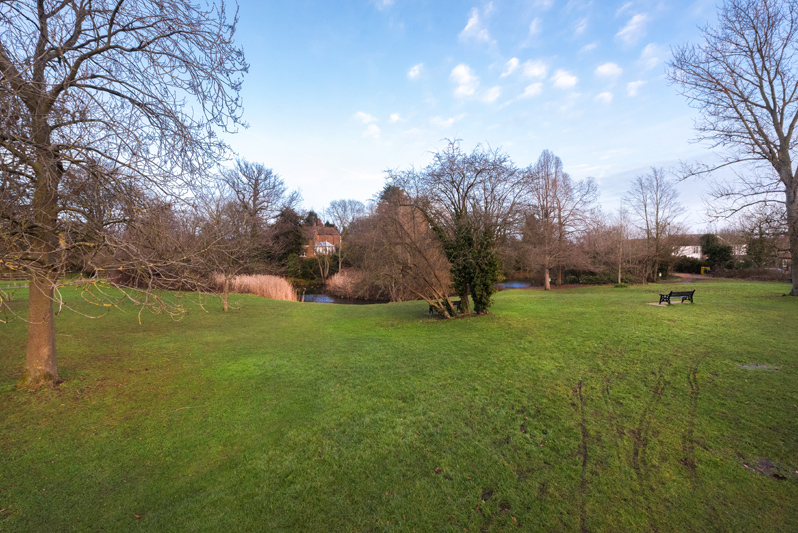 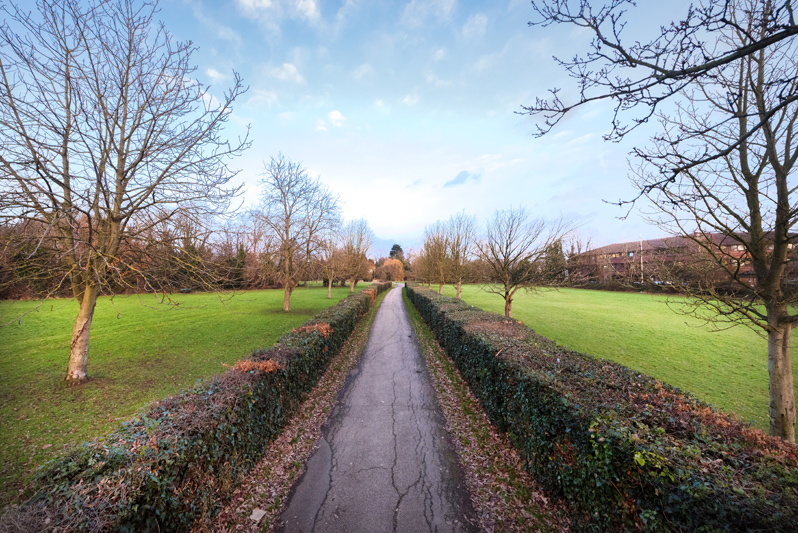 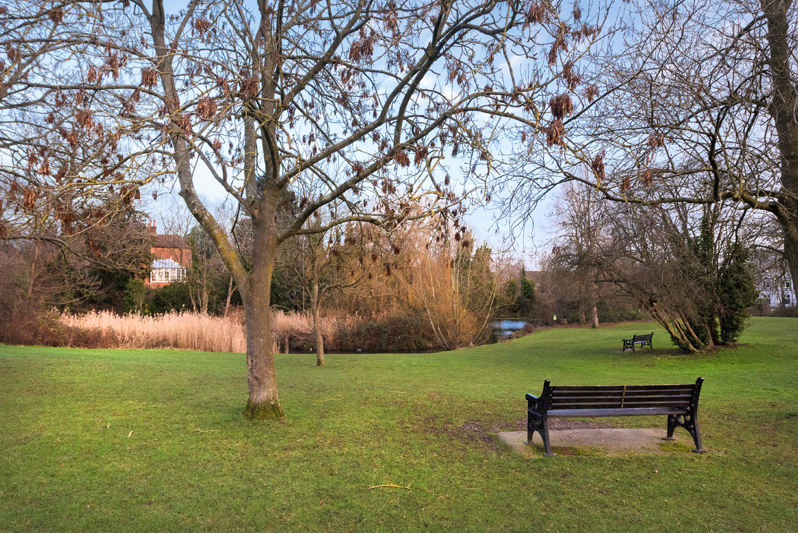 One of the benefits of living a short way out of London is the way that green spaces suddenly open up around you. Due to its proximity to the river Surbiton already has an amicable village feel to it, but with its abundance of parks, both large and small, its almost too easy to forget you are living so close to the country’s capital! Fishponds Open Space and Alexandra Park are a short walk from the centre of Surbiton, and just over the river you have Hampton Court Park and Bushey Park, both spacious and beautiful. And of course the glorious Richmond Park is only a short bus or car ride away. 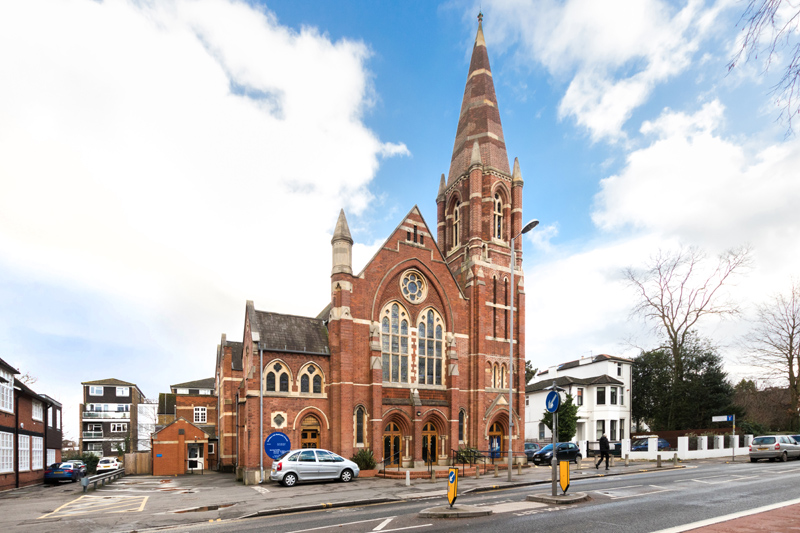 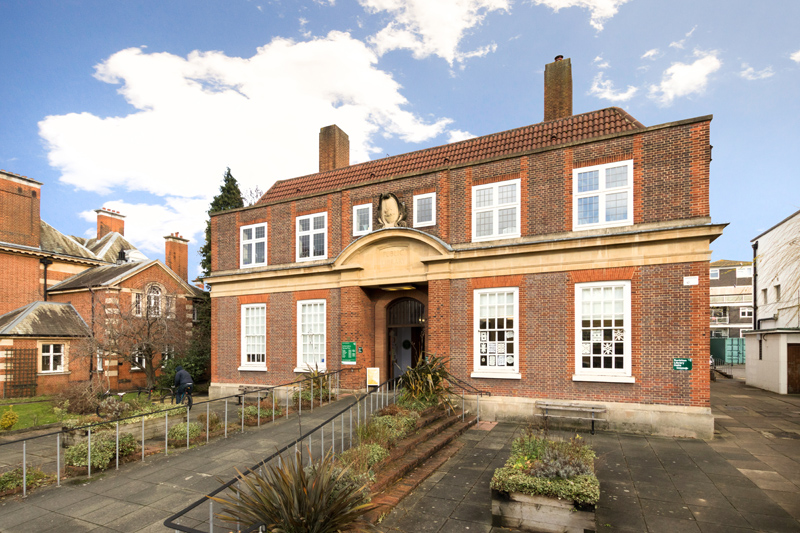 Overall, Surbiton is a really great mix of bustling localities and peaceful village life. The accessibility of both Kingston and London mean that those who need a bit more buzz have it very readily available, but with the added bonus of a vibrant local community. Several beautiful historical buildings, such as the library and the Methodist church, give it the dignified elegance of the Victorian era, while its exciting new developments show that the area is quickly progressing.

If Surbiton is an area that had never occurred to you before as a place to live, it’s time to take a trip and explore it for yourself!

Our recently completed development, at 147-151 Ewell Road, still has a few more flats to be snapped up! Choose from a range of 1, 2 or 3-bed high-spec, beautifully finished apartments near to loads of local amenities, a short walk from the train station and a hop, skip and jump from local parks. These flats are available on the Help To Buy scheme. Contact us today for more information or to book a viewing.